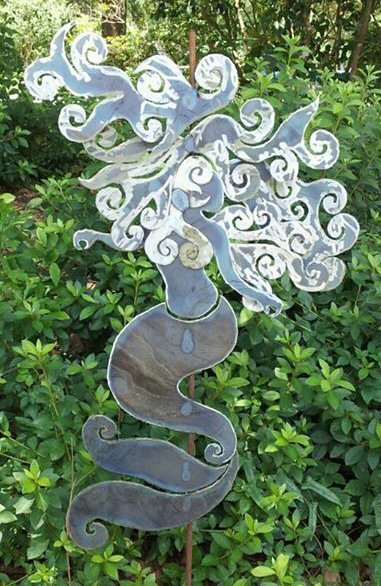 Multi part Mermaid welded in layers to give a dimensional look. Constructed upon a steel rod and base.

Legends of half-human, half-fish creatures go back thousands of years. Everyone has seen pictures of mermaids. Sightings were made by the early Arabs and the Greek Pliny in 586 A.D. Many medieval sailors claimed to have seen them and such reports continued right into the 1900’s.

Most sightings by sailors were probably normal marine creatures, such as manatees, dugongs, or sea-cows (now extinct). These appear to cradle their young much as a human would carry a baby. It is possible that sailors, seeing these unfamiliar beasts, would assume that they had stumbled across some sort of humanoid species. Mermaids described by the famous explorer, Christopher Columbus, were almost certainly manatees. He reported seeing three mermaids in the ocean off Haiti, in January of 1493. He said they “came quite high out of the water”, but were “not as pretty as they are depicted, for somehow in the face they look like men.”

However such descriptions are very different from the usual portrayal of a mermaid and the idea, of a beautiful but dangerous creature, probably arose from the earlier stories of the Sirens of the Aegean Sea. The Sirens were sea-nymphs who had the power to charm by their song all who heard them, so that the unhappy mariners were irresistibly impelled to cast themselves into the sea to their destruction. The Sirens were first mentioned in Homer’s Odyssey. This may have shaped the portrayal of mermaids from medieval times onwards. The modern view of mermaids has also been influenced by Hans Christian Andersen’s fairytale, The Little Mermaid, written in 1836.

To request more info on this piece, use the form below.